Kneehigh Theatre’s revival of the show The Flying Lovers of Vitebsk, first staged in 1992 as Birthday, at Bristol Old Vic is a perfect match-make for the romantics. Interweaving music, dance, and a bit of puppetry, it cutely depicts the love story of Russian-Yiddish painter Marc Chagall and his wife Bella, who will be forever haunting his beautiful paintings. As with other immortal creative couples from history – the list would be endless – in essence it’s the classic narrative about the creative genius and his Muse who never fails to inspire him.

The curvy set helps to portray the feeling of weightlessness, just like in Marc Chagall’s paintings, the Expressionist and father of Surrealism as credited by no else than André Breton himself.

The story follows the couple’s life linearly along the line of History that constantly surprises, from the Russian Revolution to the Communist pogroms and the Nazi systematic extermination of Jews. It begins with their lovely encounter and falling in love head over heels and ends with Bella’s unfortunate death which could have nowadays been prevented with plain antibiotics.

The peaks in the show are evenly spread – their monumental meeting, their wedding day, honeymoon, the birth of their daughter, and finally Bella’s illness – and yet one feels most touched with the everyday depictions of love turning magic, as in when Bella comes alive after 11 hours of stillness and waiting for Chagall to return home, and their love paints each passing night in bright colours and washes away any remnants of darkness and misfortune. 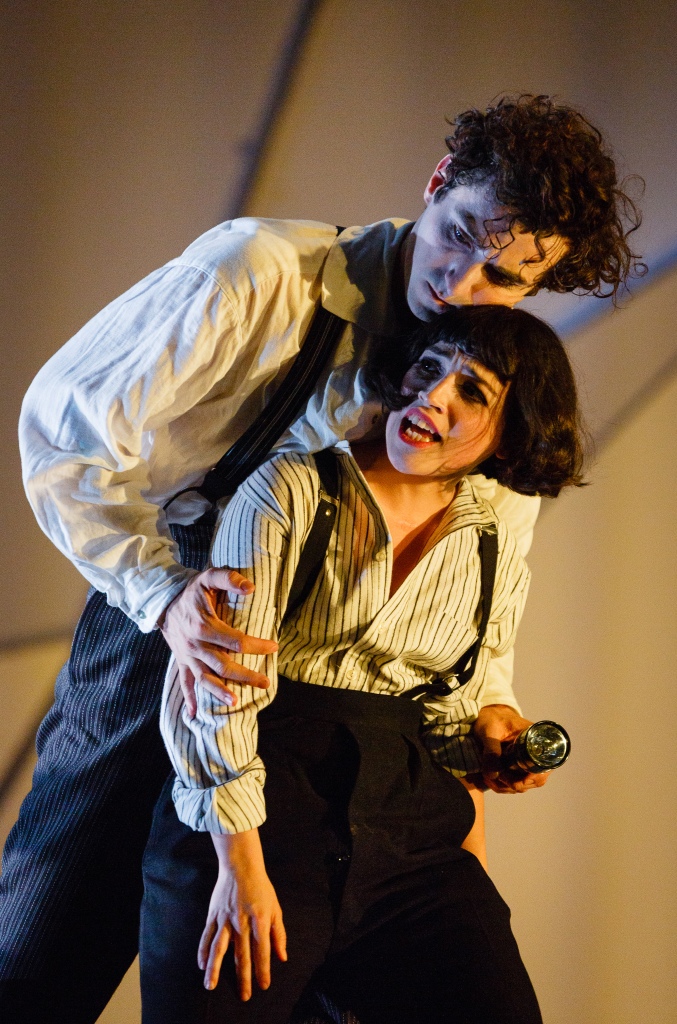 Music plays a crucial role and interjects all scenes with its tones of traditional Yiddish in a modern style. Audrey Brisson wins over the audience with her crystal clear voice and Marc Antolin brilliantly embodies a playful, puppet-like movements and gestures of Marc Chagall, the painter, as we imagine him to have been.

The narrative occasionally falters with repetitious scenes, which an unbiased eye may easily judge, though all acts and rituals of love are repetitive in essence and can only seem extraordinary to the inward eye of an insider.

The Flying Lovers of Vitebsk focuses on the love story, on the everyday magic one finds, and is the force that truly colours life in greens, yellows, and purples. The history unravels in the background and doesn’t quite touch the hearts of spectators as it’s not quite present, always outside, always there but not quite there, almost dreamed away. It only goes on to show the dreamlike nature of the Chagalls and how love counteracts the blows of the world.

The Flying Lovers of Vitebsk is at Bristol Old Vic until 11 June and then tours to the Sam Wanamaker Playhouse, London, the Nuffield in Southampton and the Asylum, Cornwall until 31 July.