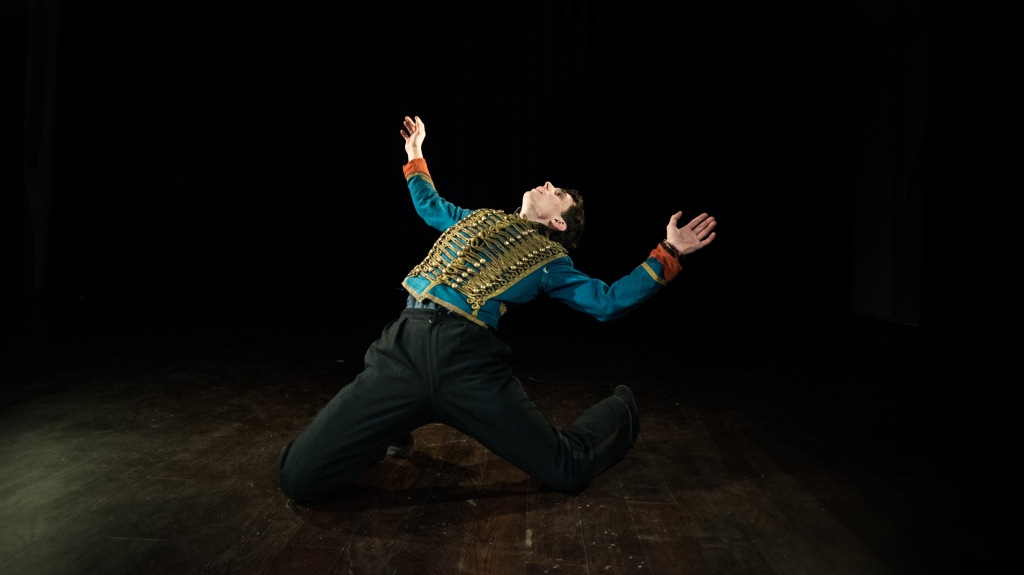 This week, on 19th and 20th of March, the Trinity Centre was taken over to showcase five solo practitioners’ work. Solo Contemporary Performance Forum is a South West organisation that offers support to solo performance makers at any stage of their careers.

On the first evening before ‘curtains were raised’, Misri Dey, organisation founder, and Ria Hartley, artist co-ordinator, addressed the gathered audience to present their organisation, its beginnings and growing plans, the evening’s artists’ background and the history of the performances they developed.

In her charming informal address, Misri Dey pinpointed the significance of the word ‘premiere’ as a first showing of an artist’s work, and the courage of such an endeavor. With this powerful thought, the audience went in to dwell on the implications of the concept by the works that were to follow – an evening of audacious interaction of artist and viewer times three.

‘With Force and Noise’, a performance by Hannah Sullivan

The central theme to this piece revolves around anger, an articulation of anger, to be more exact. Hannah Sullivan herself explains it as ‘an experiment in costume and words: autobiography and fiction, blurred bodies and unsung bells’.

It started slowly with Hannah approaching the audience bit by bit and opening a fragmented story that builds up, swirls and turns in different directions, just like anger does, until reaching a culmination point equalling an explosion. Bells attached to Hannah’s back help in structuring the build-up of an outburst in words of memory and fiction. There’s story, song, sound, silence, and movement involved in Hannah’s embodiment of this strong human emotion as powerful as a hurricane that isn’t immune to anyone.

In the intermission between the two premieres, the audience was offered to take a look at Jo Hellier’s installation ‘Flood Plans’ at the main auditorium of the venue. The installation is the second incarnation of ‘Flood Plans’; the first being launched as a performance premiering at IBT15.

Hellier’s research is concerned with human agency in relation to climate change. ‘Flood Plans’ is a projected film with an accompanying sound scope. The source material was collected around rivers and waterfalls in the Brecon Beacons.

The split, mirrored image of turbulent water draws out patterns and rhythms in the chaotic flow, and invites the viewer to draw meaning and metaphor.

It’s a frightening idea of human intervention with an earth’s raw material that’s most essential for life, and yet taken for granted. Hellier takes guerrilla action in a mixed form of sound and video. The sound goes to a frightening pitch that overwhelms the ears and gives the spectator/listener a shudder that works on both physical and psychological levels.

Levy’s dance performance embodied the paralysing effect of fear and the unknown. It raises questions such as how to escape from it and the ways of getting out of our comfort zones without the overwhelming feeling that’s usually there to prevent it from happening.

‘Rabbit’ focuses around the lies that we create in order to protect ourselves from ourselves. Levy represented this by starting his performance with a rabbit mask and uncovering multiple layers of costume signifying different personas, until he stripped to his bare self. The judgement of others is a burden that’s carried throughout life, and ridding oneself of it takes enormous strength and courage, seemingly unachievable.

His dance goes through stiff movements of one who’s uncomfortable to the point of agility personifying freedom – a personal freedom.

Hannah Sullivan is a Bristol based Performance Maker. She works with autobiography, popular culture and contemporary choreography, creating a collaboration of text, song and movement with a powerful simplicity. Hannah collaborates with other artists in sound or costume and has recently worked with researchers in history and politics within her development periods. Hannah’s previous solo ‘Echo Beach’ was programmed at Mayfest, Battersea Arts Centre and The Place. Hannah is a graduate of Dartington College of Arts and The University of Bristol and is a member of Interval, an artist-led support network and space in Bristol. www.hannahsullivan.co.uk

Jo Hellier is an artist working with performance, installation, film and sound. Currently her work is concerned with ecologies in the widest sense, looking at natural ecosystems and comparing them to human structures; from the microcosms of the body to the broader systems of society. She likes work that allows her to see something in a new way or discover new aspects of feelings she thought she already knew. After graduating from Dartington Jo Hellier worked in London and Mexico before settling in Bristol. Here she created 97 Years an interactive installation produced by SPILL, Women, Bikes, The Future a film and exhibition and The Water Is Wide a site specific performance about communicating scale. www.johellier.com

Alessandro Marzotto Levy is a dance maker working solo and within ensemble Impermanence Dance Theatre. Alessandro creates new ways of dancing by placing himself outside of his comfort zone to find in himself new choreographies. His performance resonates feeling and emotion by creating something beautiful that can be taken home and reflected upon. Alessandro wishes to relate to a wide range of audience, through advice and exploration with other artists.